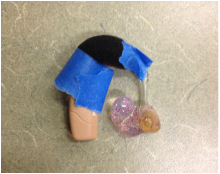 We met with Cheyenne and her mother again this week.  Unlike the first time, in which we just asked questions and took notes, we spent the bulk of this meeting testing potential solutions. Cheyenne brought in her hearing aid, sports glasses, microphone attachment (used by her coaches previously and by her teacher currently).  She also brought in a stethoscope like tool that attaches to her hearing aid to allow us to hear what she hears.
We took turns listening as people in the room spoke.  It was very loud and we found that is was hard to tell distance and direction of noise while using the hearing aids.  Additionally, Cheyenne blew on the hearing aid's built-in windscreens so we could experience what she heard during her soccer games while running.  The wind blocked out nearly all additional noises and we were able to see how difficult it would be for Cheyenne to hear her coach - or any other noises - while on the field during a game.

We took turns listening as people in the room spoke.  It was very loud and we found that is was hard to tell distance and direction of noise while using the hearing aids.  Additionally, Cheyenne blew on the hearing aid's built-in windscreens so we could experience what she heard during her soccer games while running.  The wind blocked out nearly all additional noises and we were able to see how difficult it would be for Cheyenne to hear her coach - or any other noises - while on the field during a game.

﻿ After gaining these additional insights, we went on to test some potential solutions.  Wearing one hearing aid, we had Cheyenne turn to face a fan - our method of standardizing wind.  One researcher stood at the opposite side of the room and read from a list of names - fitting in "Cheyenne" randomly.  She changed her volume - moving from loud to medium to quiet - and we recorded whether or not Cheyenne was able to hear her name at each level.

This process was repeated multiple times as we tested a variety of treatments for wind.  The control was the hearing aid alone.  The test variations were covering the built-in windscreen with: a microphone wind screen, a DeadCat, and a headband.  ﻿ 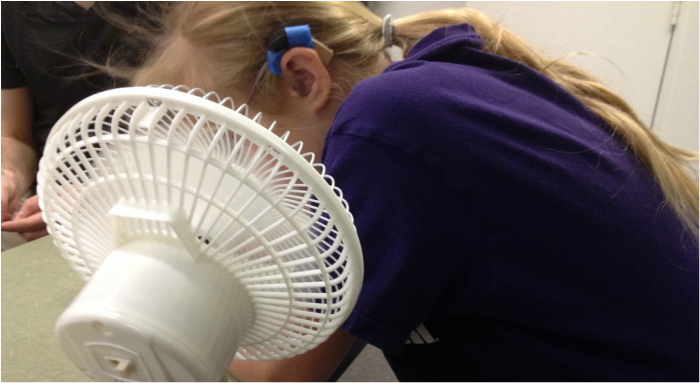 RESULTS:
After this testing, we asked Cheyenne about her preferences and found she liked the DeadCat solution best.  When further prompted as to why, she couldn't give an answer.  Observing her interactions, we saw that she really liked playing with the DeadCat material and feel that it was this enjoyment that made her so excited about that solution over the others.  She did say that the microphone wind-screen wasn't as comfortable as the soft fur of the DeadCat was.

Moving forward, we believe that the wind reducing method is definitely worth pursuing.  It looks like the microphone wind screen was the most successful solution but we will need to work on making it a better size, a more efficient shape, and more comfortable for Cheyenne to wear.
IMAGE SOURCE: http://www.harriscomm.com/media/catalog/product/cache/1/i
mage/9df78eab33525d08d6e5fb8d27136e95/C/O/COM-AT216_rcvr_2.jpg 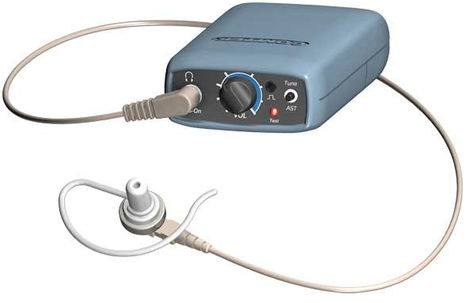 
After testing the potential walkie talkie system with Cheyenne and discovering that it was simply too uncomfortable for her, we decided to pursue our other, slightly more difficult option: using a radio to send third-party FM transmissions to the FM receivers in Cheyenne’s hearing aids. The difficulty with this is finding a radio at the very high frequency of 216.0125 MHz in order to match the frequency/ channel of the FM transmitter she currently uses. As we didn’t have this solution ready for testing in time for class on Thursday, we suggested that Cheyenne stay in school for the day.

On Thursday, we began our search online and quickly discovered that it would be very difficult to find a cheap radio with this frequency range of transmission. A radio by Comtek priced at $500 was one of the only options we found. We looked on Ebay and Amazon with the hope of finding used Phonak devices as well, but this also turned out to be a fail. Thus we decided to look into making our own radio transmitter. We traveled down to Ford to visit the engineering lab to see if anyone would have any suggestions or potential solutions for us. We were told that building our own radio at this frequency would be a very difficult task, but we were given a list of websites such as seeedstudio.com in which we might potentially find a radio at this frequency (none of the sites had one, but we emailed all of them asking that they look into it for us). Furthermore, we were given the suggestion to call Phonak and explain our situation/ Cheyenne’s story to see if they would potentially donate a refurbished radio to us.

Lastly, Professor Piper assisted us by giving us a few more engineering contacts, one of whom is the friend of an engineer at a hearing aid company. We have reached out to these contacts and in the upcoming week, we will continue our search as well as look into ways to potentially commission someone who is capable of building a radio at this frequency him/ herself.

With the realization that walkie talkies aren't a feasible option and the knowledge that Cheyenne's hearing aids already sport FM boots, we have honed in on our final design proposal: a handheld FM transmitter that will broadcast directly to her hearing aids via Phonak's special frequency: 216.0125 MHz. This will be clipped to the coach's waist, and attached to a headset which he will wear. We will wire a momentary button into the headset cord, allowing for brief and rapid transmissions.

The majority of this week was spent in pursuit of seeing his design realized. We called Phonak about the possibility of donating an FM transmitter, but they were resistant. We also called a third party FM transmitter producer, Comtek, who were more open to the idea. We are still in talks with them.

In addition to procuring an already-built transmitter, we have also investigated the possibility of building one. We talked to several experts in the electrical engineering department on campus, and sent out countless emails. However, despite the seeming simplicity of the project, no one seemed inclined to help or knowledgeable about someone who could. Finally we located a custom FM company that operates out of Berkeley, California. After extended talks with them, they have agreed to build us a unit to our requested specifications for $200. This is currently the most promising avenue for full design manifestation, and we are still in  deliberation. We are hoping to have a functional model by the end of the quarter.